The world is evolving to standards of digitization everyday. One idea to propose is to bring SuperRare Music Video NFT platform to life where success is not reliant on record label deals, touring, industry cosigns and streaming, but where artists earn and fans are rewarded.

As NFT’s started getting traction in the early 2021, the music industry started merging with the concept as Grimes sold 6 million worth of digital music art and Kings of Leon became the first band to release a music NFT album. Coming a year later in 2022, we still see artists thriving on selling their creative pieces of art as well as finding this new channel to connect with their fans never seen before. Music NFT marketplace competition has increased significantly. With a handful of known platforms in the space such as Nifty Gateway, Foundation or Zora, there is a need for further integration on a blockchain level.

What we already know is that having an NFT is not limited to a mere ownership only nowadays, but the utility offerings has also diversified. Artists are experimenting in numerous ways to offer complimentary royalty shares, usage rights, collaborations, community engagements, and several other exclusive perks to the buyers. This use case is allowing artists to break away from the traditional ways of selling music to a more profitable pathway. Millions of people around the globe are craving for more meaningful artistic experiences where the ear meets the eye.

Overall, having a distinctive Music Video NFT platform for music artists can potentially and positively transform the music industry. It will not only help in boosting artist incomes, reducing piracy, creating a direct supportive relationship between musicians and fans, but can also bring a much needed change of how music is distributed.

Today, the music industry is facing dilemmas, including the burden that record labels seem to place on the musicians. Typically, these labels and streaming services determine the market trends and control how an artist render activities by taking away their freedom of expression. The days of just listening or viewing a music video are waning, and a new approach towards music is rising. A unique Music Video NFT platform can provide all-in-one experience. Just imagine, if you could own a piece of art from a song that you like and make it to your collection? Isn’t it a stimulating experience?

The NFT sector remained the most iconic in the last year or so when the trading of NFT’s as a whole reached more than $17 billion which was approximately 21,000% spike since the previous year 2020. The phenomena caught the attention of many artists pre-releasing their albums or songs on NFT marketplaces. DJ 3LAU sold 11 million worth of music NFT’s on ETH blockchain and continues to create masterpieces for his audience.

This sudden change of dynamics is allowing musicians to divert their attention from streaming platforms to NFT marketplaces. On these platforms, the musicians can sell their original art and when the full album releases on the traditional platforms, the buyers get the profit sharing based on the number of NFT’s owned by the buyer.

Music NFT trading industry is still under development on a larger scale. However, there are various new and emerging Music NFT marketplaces trying to close the gap and willing to offer top-notch features to music artists to tokenize their music to promote sales.

The proposed specifications are as follows:

Firstly, musicians need to create an account or either fill a form available on the NFT marketplace. They submit their credentials such as social media platforms, links to live performance videos and any relevant information that determines them being an authentic artist. Once verified by the admins, their accounts will be approved and be given options to upload their music videos. After uploading the music videos, the musicians mint the NFT’s by paying the gas fees.

After the file gets tokenized, the artist places a price to the NFT’s and open/close NFT bids. Once the NFT deals close, he/she must initiate the transfer of the NFT to the owner. The platform being used to support the transactions will be in ETH & RARE currencies.

The platform itself can play a role in preventing fraud with the help of an escrow mechanism. When a buyer wins a bid on a collectable, the funds are held by a third party protected account until the NFT is transferred to the buyer’s wallet and funds are obtained by the NFT seller.

How cool it can be to find the genre you are looking for on your favourite Music Video NFT platform? Easily locating an artist who is about to drop a pre-released track or first intro demo of an upcoming song can drive fans to storm into the marketplace waiting to get in cue to bid on their favourite artist’s new release. Whether it’s EDM, Pop or Jazz & Blues, search engine indexing help buyers navigate what they are looking for.

Since all musicians work in a different manner, some musicians can choose to place the track video file for investors to view, listen and get a sense of feeling before participating in the auction later. This approach allows fans or buyers to take their time, gather funds in some occasions and then bid in the upcoming auction.

A premiere platform such as SuperRare where music artists will be vying to put their masterpiece videos would definitely require to increase the file size limit for this to happen. This would allow the artists to create videos without compromising the quality due to compression. NFT’s is about having your own rare collection and higher resolution transmits craftsmanship.

Considering that we all NFT enthusiasts at some point would own a collectible. How convenient it can be to have a user-friendly tool manager to show token details such as contract addresses, token ID’s, release dates of the Music Video NFT’s and much more all in one place. The more relevancy there is, the more users would come to the platform.

By looking at the current model of SuperRare 2.0 & it’s advent of Spaces, I propose the following amendments for the Music Video NFT platform: 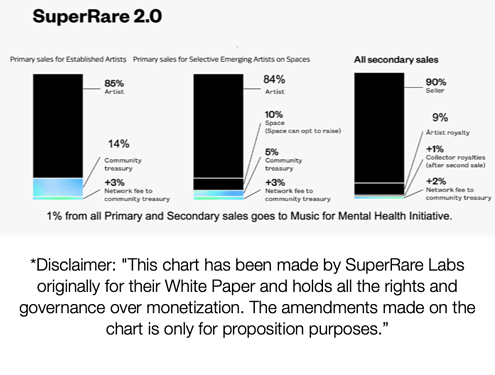 Currency of The Platform:

The goal is to support the RARE token and make it more streamlined to become one of the top tokens in the crypto world. Though a lot of individuals use ETH which is great in terms of reliability and legitimacy of the marketplace, but RARE token should always be at the forefront of the governance.

If you have earned it, you deserve it. SuperRare Labs motto perfectly aligns with community engagement. No initiative is possible without the support of the people backing the project. As we build a Music Video NFT platform, members of SuperRare will get to enjoy competitions, giveaways, artist/fans interactions, tickets to the physical/virtual concerts, winning RARE tokens, talent hunt, voting powers, and even possibly becoming a member of the SuperRare team.

There will be two tiers of artists who can join the SuperRare Labs Music Video NFT’s house:

Tier 2: In this category, we will have emerging artists on the Spaces platform, where they will make their storefronts and build their audience. In order to qualify for Spaces, these musicians fill out a form and go through an in depth KYC process highlighting their identities and musical journey. Space races could be another way to compete and to be considered to join Spaces. After gaining traction on Spaces and multifaceted review, they can be contacted by a SuperRare staff to join the NFT Video Platform.

Imagine SuperRare having it’s own series! These videos will provide updates to the community about the most happening events such as artist line ups, interviews, collaborations and so on to create hype and engagement.

Video speaks a thousand words and represent the most compelling use case for NFT’s in particular. Having a Music Video NFT marketplace can bring enormous earning potential.

Some of the key benefits to this proposal are as follows:

Call it a small drawback if true or a misunderstanding if not that NFT minting and selling increases the carbon emissions. There had been speculations when ETH was on a proof of work mode. Now some say that since the merge happened, it should cut the emissions to at least 50 percent.

A more carbon neutral approach has been voiced among several NFT communities. I firmly believe that SuperRare is committed to and looking at all sustainable solutions such as carbon offsets on ETH and various blockchains to provide more efficiency.

This proposal is a pitch to the SuperRare team and to the community about revolutionizing music. The success of any NFT marketplace depends largely on adoption and sales.

These metrics can either be independently tracked by SuperRare Labs or a third party network can do it. I am more than willing to dive deeper on metrics and how we can unleash our true potential.

In the end, its a win-win for everyone if we bring a Music Video NFT platform to life. We know that SuperRare has what it takes to be the leader in bringing music and art together.

Thank you so much for this thoughtful and thorough post @djmoon. Are you imagining a completely separate interface for music / video artists? Based on what I am reading, I think that this is largely already supported by what the platform offers - though file sizes are a restriction for longer videos. In light of that, I think one of the best ways to approach drawing more attention to music on the platform would be by launching a space dedicated to promoting musicians.

Thank you so much for taking the time to give your input and referring me to the Space Race proposal which was interesting indeed.

To elaborate on the proposal, my vision is a separate Music Video NFT platform for mainstream musicians and Music Video Spaces for the emerging talent promotion. This will all be part of SuperRare Labs ecosystem. Having an independent dashboards and tools for musicians will allow them to have their own space.

I believe this will help us in building more utilities and open channels for art as a whole.

I don’t think there’s any reason why music or music video NFTs shouldn’t be a part of the SuperRare network. But my inclination is that we first think about ways to decentralize this away from SuperRareLabs. It would be a great way to demonstrate that the Foundation is an independent organization and capable of coordinating with multiple independent orgs to build out the protocol.

So whether that’s through a new developer team putting a proposal though the grants program. Or though some kind of DAO agreement of an existing NFT Music Platform. Not quite an acquisition but something similar to the MSA agreement the DAO has with SRL.

I also like the idea of a Music Video Space. I think that would be a fun and cool addition. And maybe operating a space first boostraps a team into deploying their own platform down the line.

Thank you for your feedback. It’s all about initiating the process of building such a space. Integrations and acquisitions can come in many ways for sure.

Yes! What I’m hearing is a good ‘MTV’ for NFTs. Though wildly popular, MTV didn’t have such good effects on popular music, functioning somewhat as destructive gatekeeper. NFTs have proven to be super-helpful to artists - and following in that spirit - a new, constructive, innovative, artist-first NFT ‘MTV’ would be right on time, and help to onboard musicians. However, I do believe keeping it under the umbrella of SuperRare Labs is necessary in the beginning. Separating too soon in the name of decentralization would make the effort harder and less efficient imo. Also, I also think a brilliant and patient marketing campaign such as MTV did will still work today. Seeing massive 'M’s on bus-stops and billboards for a year built suspense to a frenzy (yes, I remember lol). 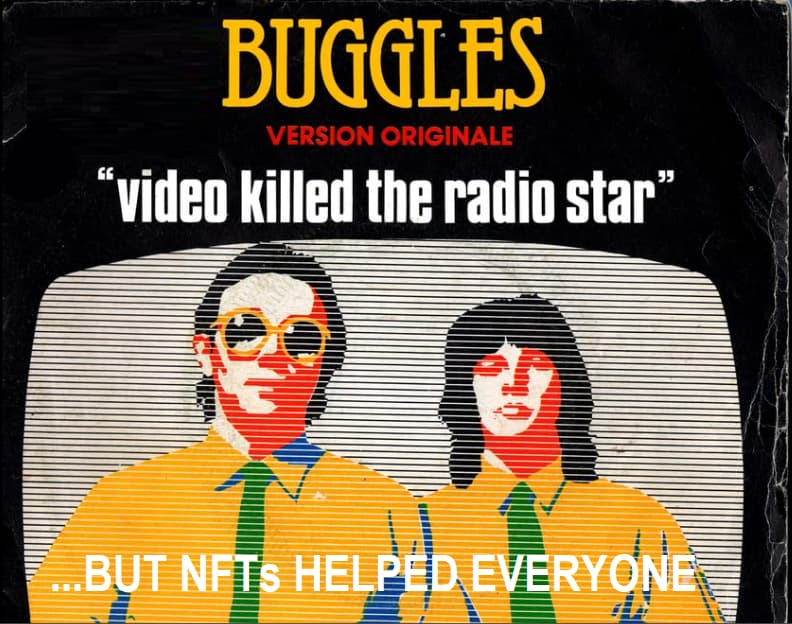